Building facades typically consist of cladding that is placed on the outside perimeter of the structure. Traditionally, cladding serves purposes of providing architectural envelope and protection to the occupants from the outside elements. The goal of this research project is to rethink cladding systems as multi-functional structural units. Not only would the cladding serve its traditional purposes, but it would also be engaged as an engineered system to protect the structure against multiple hazards, including seismic, wind, and blast loads. Cladding serves both as the point of application of externally applied lateral loads such as wind and blast as well as a contributor of added inertia to seismic or wind-induced vibrations. This project will explore the use of semi-active controlled connections between cladding and the structural framing of a building - these connections will be capable of providing variable damping to mitigate the effects of extreme loading. The results of the project will engage the cladding on a building to enhance a structure's resilience to multiple hazards. The professions of architecture and structural engineering will need to collaborate in design of cladding in the future.

The focus of this project is to develop computational simulation of a prototype semi-active damping device, installed between the cladding and structural frame, to the varying loading frequencies and intensities from multiple hazards. The objective of the system is twofold: (1) to engage the cladding as a mass damper to mitigate inter-story drift due to lateral load vibrations; and (2) to utilize the device as an energy dissipator under lateral loads. An innovative semi-active device with decentralized control laws will be developed to satisfy the varying energy dissipation and control objectives associated with each hazard. The research team will perform advanced nonlinear numerical simulations of realistic buildings with semi-active damping devices to assess the various parameters that influence the control laws and performance of the devices. The simulations will be validated through large-scale experiments in the laboratory. The experiments will include real-time hybrid simulations for wind and seismic loading that account for the complete building system and its interactions with the semi-active damping devices and cladding. Air-blast shock tube tests will be conducted to simulate blast loading. Performance-based design procedures will be established to integrate the design of semi-active cladding within a holistic structural design approach. 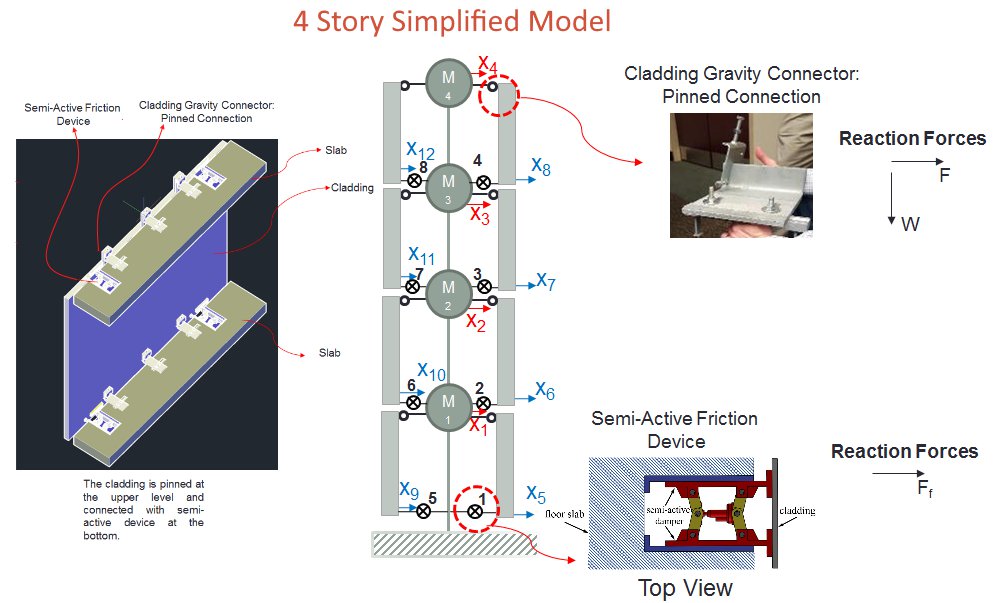