The Real-time Integrated Control System is configured with the experimental protocol required by the user to perform their test. The algorithms to perform the different types of tests mentioned in the Science Plan reside on the RTMDxPC, which is a dedicated real-time xPC kernel. The algorithms were implemented by developing software that was cited above, and which will be discussed further below. All of the algorithms have been created in Simulink on the simulation coordinator (RTMDsim), and Simulink Real-Time from MathWorks, Inc. (Matlab 2014) is used to recreate real-time executable code that is subsequently loaded onto an RTMDxPC. If the experiment requires large computational models with many degrees-of-freedom to create the analytical substructure, then the executable code is parallelized and placed onto two RTMDxPCs such that multi-grid processing can be used to run a large experiment in real time (Chae et al. 2012). The Real-Time Integrated Control System uses SCRAMNet to enable communication among the telepresence server (RTMDtele), the simulation coordinator (RTMDsim), real-time target PC (RTMDxPC), the servo-hydraulic controllers (RTMDctrl), and data acquisition system (RTMDdaq). The data exchange across SCRAMNet occurs within 90 nanoseconds, essentially enabling shared memory among the workstations, thus enabling real-time testing capabilities. Synchronization is maintained through the use of a pulse trigger placed on SCRAMNet at the rate of 1024Hz. A data structure for SCRAMNet is in place that includes multiple states for commands and feedback signals, enabling advance servo-hydraulic control laws to be implemented to meet user needs and complex testing methods to be performed. Experiments can be run in real-time (e.g., real-time earthquake hybrid simulation, distributed real-time hybrid earthquake simulation, dynamic testing), or at an expanded time scale (e.g., hybrid simulation, distributed hybrid simulation, quasi-static testing). The Real-Time Integrated Control System is operated in distributed hybrid simulation mode using either UI-Simcor (Kwon et al. 2005), OpenFresco, or custom software. The System is robust and of a flexible design, enabling software and middleware packages developed by the NEHRI CI or users to be plugged into the System and utilized for conducting tests.

The integrated control system has a hydraulics-off simulation mode for use in validation of testing methods, training, and education. In the hydraulics-off simulation mode, the servo-hydraulic equipment (e.g., actuators, servo-valves) and test structure are analytically modeled. Models of the servo-hydraulic equipment have been developed in Simulink for this purpose, and have been calibrated based on system identification tests of the equipment (Zhang et al. 2005). To ensure the safety of personnel and equipment during a test, software limits are enabled on the RTMDxPC and RTMDctrl, hardware piston stroke limit switches are placed on the actuators, and an emergency stop system is activated throughout the laboratory.

For hybrid simulation, numerous options exist for creating the analytical substructure. The open-source program HybridFEM has been developed by Karavasilis et al. (2009) that enables analytical substructures to be created using embedded MATLAB functions in a Simulink model. The source code can be compiled and run in real-time to conduct real-time hybrid simulations. HybridFEM has an element library that includes nonlinear fiber elements, nonlinear panel zone elements, nonlinear hysteretic connection elements, nonlinear geometric elements based on the co-rotational formulation (to model the P-? effect), along with a material library that enables the hysteretic stress-strain behavior of steel, concrete, and reinforcement to be modeled. User-defined elements can be readily added to HybidFEM. HybridFEM has been successfully used on numerous projects by users to conduct a variety of types of experiments, including real-time hybrid simulations of structural systems (Mercan et al. 2008, Chen et al. 2009, Karavasilis et al. 2011a, Chen and Ricles 2011a,b, Chen et al. 2012, Chae et al. 2013a, 2014, Cha et al. 2013, 2014, Friedman et al. 2014, Kolay et al. 2014, Dong et al. 2014a,b). Translator software can be used to convert an OpenSees model to use in HybridFEM. The option also exists to use OpenSees on the RTMDsim for conducting hybrid simulations. OpenFresco is used to provide the interface between OpenSees (where the analytical substructure and integration algorithm resides) and the experimental substructure (Marullo et al. 2008).

Hybrid simulations are conducted using explicit integration algorithms developed by the PI (Chen and Ricles 2008, Chen et al. 2009, Kolay and Ricles 2014, Kolay et al. 2014). These algorithms are unconditionally stable, have second-order accuracy, and do not require iteration to satisfy equilibrium of the equations of motion (making them ideal for real-time hybrid simulation). One of these algorithms is based on the KR-? method. In addition to being unconditionally stable and 2nd order accurate, the KR-? method features controllable numerical energy dissipation (i.e., numerical damping), enabling it to be used to model structures that develop significant nonlinear response involving fracture or strength degradation (e.g., non-ductile reinforced concrete structures that develop cyclic member cracking and strength degradation, Kazemibidokhti et al. 2014).

The target displacements of a test structure (i.e., experimental substructure) are precisely achieved in real-time using an actuator control law that is based on an advanced adaptive delay compensation algorithm developed by the PI (Chae et al. 2013d). The algorithm uses feedback signals from the measured state of the test structure to ensure that the test structure target displacements are accurately achieved. This is accomplished by avoiding displacement errors from developing in the simulation due to both actuator and test fixture dynamics (Dong et al. 2014b, Chae 2014). For multi-directional experiments it is necessary to correct for kinematic errors in real-time that effect actuator control. The testing protocol uses kinematic compensation to avoid developing kinematic errors in multi-directional experiments that is based on an algorithm developed by the PI (Mercan et al. 2009). The algorithm accounts for the precise displaced configuration of the test structure and the actuators in determining the actuator command displacement signals issued to the servo-controller (RTMDctrl).

Real-time telepresence is available using teleobservation and tele-operation equipment (RTMDtele) that is tied to the testing systems using discrete and global sensors, including high-resolution digital video and imaging capabilities, making it possible for remote collaborators and observers to access the Lehigh EF. Real-time structural system animation software has been developed (RDV 2014) to enable the real-time visualization of the response of the complete system, including analytical and experimental substructures that exist in hybrid simulations. The experimental protocol includes the use of the Lehigh Data Model (Lee et al. 2008) described in the RTMD User’s Manual to define the experiment, and enables post-testing use of archived data from a hybrid simulation that is more complete. 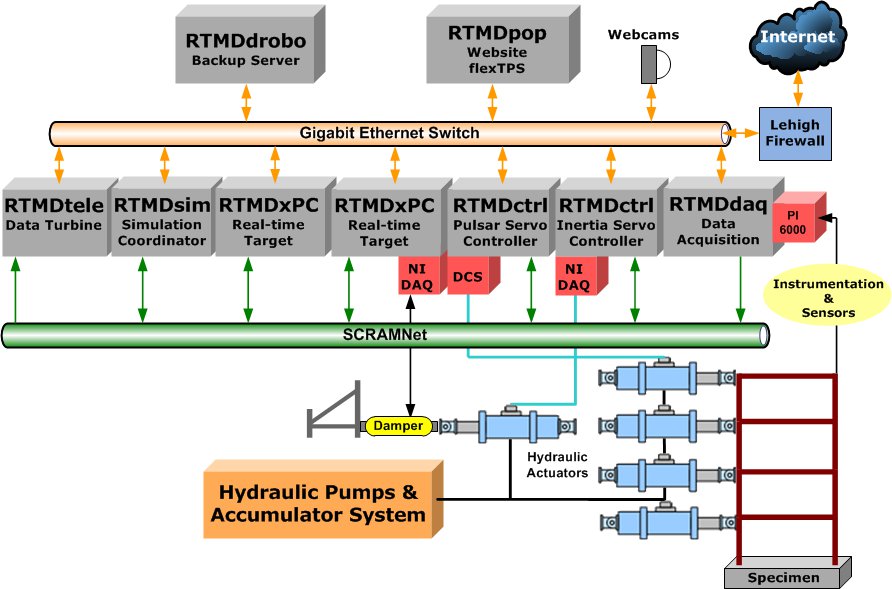